Sometimes, people call Thailand the Land of Smiles. As pretty as the smiles are, the women are equally gorgeous. Thai women are known to be quite beautiful, so don’t be surprised if one catches your eye and you suddenly want to know how to pick up a girl!

Dating Thai women isn’t that different from dating other girls, but they have unique charms that catch anyone’s attention. If you want to pick up a girl in Thailand, you may want to do your homework first before looking for a match, yes?

Thai women are easy to date, but that doesn’t mean they’re easy girls—there’s a difference. Thai people, in general, are pretty easy-going folks, so that should make introductions and pleasantries a bit easier. But beyond the handshakes and hellos, getting to know her takes effort. Where do you go from here?

Look no further than this guide! We’ll show you how to win your way through a Thai woman’s heart.

What You Need to Know About Picking Up A Thai Woman

Like every other girl in the world, there’s more to Thai women than just their good looks. Getting to know them is just as fun as meeting them at first glance. But to better understand them, you’ll need a short crash course on Thai culture and its undertones. Don’t worry—this won’t be a whole class! We’ll give you the basic nuances so you’ll know what to expect and how to act.

1. We > me: collectivism in Thai society

If you’re a Western guy, you’re probably used to individualistic thinking. Don’t get us wrong: we’re not saying that it’s terrible; it’s just something you’re used to.

In most parts of the West, parents raise their kids to prepare them for the real world, which requires independence. Normally, you won’t see adults living with their parents. In turn, parents are proud of their children for standing on their own two feet and moving out, making decisions for themselves in the process. They find unconditional love for their children as a natural thing and don’t expect anything in return.

The strong belief in individualism is influential in shaping one’s worldview and decisions. This contrasts with the Thai people’s adherence to collectivism, which we’ll discuss in the next paragraph.

Thai people’s collectivism is best seen in their dedication to their families. They never abandon their duty to them; it just comes second nature to them. They’ve been raised to become dutiful family members who contribute to their prosperity. This dedication is central to Thai people’s decision-making and beliefs.

Much like Western societies, Thai people’s unconditional love towards them is not uncommon. No sacrifice is too heavy as long as it’s for their betterment. Kids won’t expect anything from their parents in return because that’s just the reality of things. As long as they live, Thai children won’t think twice about helping their families for the rest of their lives.

Meanwhile, most Thai parents balk at the idea of their children moving out of their homes when they reach adulthood. They expect them to continue living with and helping them well unto adulthood; this criticism isn’t far off from Thai society’s attitude towards individualism or adults who want to move out and find their own footing.

If you want to make a Thai woman yours, you two may want to have a long talk about your beliefs first. When you two open up about your Western sensibilities and Thai nuances, respectively, you’ll get where each other’s coming from. There won’t be any progress if there’s no compromise.

2. Tolerance and control will collide

Most Westerners don’t like uncertainty. It triggers nervous and anxious reactions since they have little control over their circumstances. As much as possible, they want to control whatever they can to cope with their anxiety and stress. This control can be in the form of technology, laws, and religion.

Not only does control bring them relief, but it makes them feel a little safer from the “threat” of uncertainty as well. And now that we’ve brought that up, playing it safe is the best option for most Westerners. They’ll only take familiar risks instead of ambiguous ones to remain in the driver’s seat. Venting out and ranting is normal, as long as one does it in appropriate areas and times.

Western culture has a penchant for following rules. They believe that they bring good results, especially when combined with maximum effort. If your future Thai girlfriend doesn’t understand that, take the time to explain why rules are important to you.

Thai people, on the other hand, accept that uncertainty is a natural part of life. If your gal isn’t stressing about things beyond her control, this tolerance results from her culture and beliefs. Venting (especially in public settings) is frowned upon because Thai society values saving face—one wrong move in public will result in much shame.

While they care about following the law (as all citizens should), most Thai people believe that control can be unnecessary and confining when done excessively. Risk-taking is inevitable since they accept the uncertainty that comes with existence. They believe in karma—a Buddhist concept that stresses the importance of actions. Whatever your decisions are, they’ll follow you for the rest of your life, and you won’t have control over your choices’ outcomes.

Love can be scary because of life’s uncertainties. You can take a few cues from Thai people and learn to let go of some things that are out of your hands. Controlling every little thing takes joy away from life, and who wants that?

3. Nurturing is in their nature

Have you noticed how competitive Western culture can be? Life’s meaning lies in work, which results in progress and success. And because it’s a dog-eat-dog world in the West, only the strong rise to the top. If you’re not assertive and decisive enough, expect to be chewed out.

Arguments are pretty common in Western society, even in professional settings. If they’ve got something on their minds, they’ll say them without hesitation to hash things out until one side wins. If you don’t stand up for yourself, don’t be surprised if you feel iced out and unheard—especially in the workplace.

Masculinity in the West demands that men be tough and hold their emotions back. For them, crying and being emotional show weakness, making them the butt of jokes and earn the disrespect of other people. On the other hand, women are encouraged to show their emotions; however, people also discourage them from fighting back against their harassers or oppressors—even when attacked.

Thai culture couldn’t be any more different. If the West lives to work, the Land of Smiles works to live. What does this mean? Working to live means grinding it out to let yourself enjoy life’s simple pleasures, like family time and peace. Healthy competition exists, but people are more likely to collaborate willingly with one another so that everyone gets a slice of the pie. A dog-eat-dog world isn’t needed after all!

Workplaces have quality, solidarity, and equality at the top of their priorities. People avoid disputes as much as possible; they prefer peaceful negotiations as a tactic if they come up. If the West is all about speaking up, Thai people usually hold their opinions back for everyone’s sake. Aside from being stressful, ugly fights make people lose face—a big no-no in Thai society.

If you’re a pretty emotional person, you’ll be pleased to know that Thai culture encourages people to be open about their feelings! Men who cry a lot aren’t shamed (and they shouldn’t be, frankly speaking), and both sexes won’t get judged for being tender and affectionate partners.

So, what are we trying to say? Thai people are a naturally nurturing bunch. If you’re too tough, don’t be surprised by a Thai woman’s gentleness. The best course of action is to reciprocate her tender loving care with equally nurturing gestures. This way, she’ll feel validated and accepted.

Do you feel misunderstood sometimes? This is one of the challenges interracial relationships present. If you miss out on the context, there are bound to be misinterpretations. Some things just can’t be picked up by obvious signs, no?

Let’s say you ask a Thai lady to talk about herself. You’ll be surprised that she won’t say much at all! Thai people are used to high-context culture; nonverbal cues play a massive part in channeling messages, which perfectly aligns with their belief that context bears more weight than words.

While misunderstandings are inevitable in every relationship, you and your future Thai girlfriend can avoid some of them by fixing your communication issues. If you’re the more verbal one, try to adjust by slowing yourself down and keep your words deliberate. Don’t push her to say anything she doesn’t want to reveal; instead, use gentle encouragement.

When she finally opens up to you, acknowledge her effort! Pay attention to every word and read between the lines. This will take a lot of work, but trust us—the payoff will be worth it.

It takes work to pick up a girl in Thailand. But if you genuinely like her, it’s going to take more than your charm to get her to fall for you. Just keeps these points in mind if a lucky lady sweeps you off your feet! 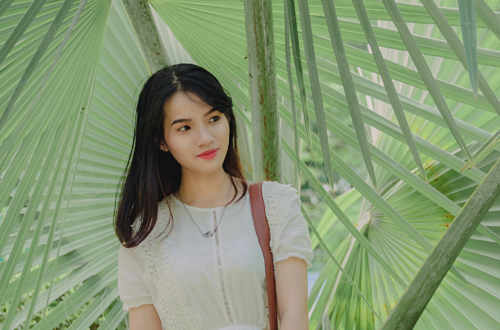 How to Court A Thai Woman How to Find Matches on the Best Dating App In Thailand What Do Thai Women Look for a Partner